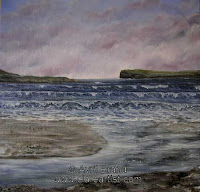 My painting of Kilkee Beach, County Clare, only a few miles from where I live. (Just finished this painting today so it will need a few days to dry).

Kilkee, a very popular tourist resort during the summer season, is otherwise quiet and peaceful. Long walks on the beach and even longer walks towards the cliffs.

On the painting, you can see George's Head, the rocky cliff on the right hand side.

And so, back to work! So many paintings to do, so little time!

The Gods must be Crazy

I cannot stop thinking about that movie. Well, its one of my all time favourites. If only we could go back to a time of such innocence and see the world through the eyes of XiXo.

But even that is really a fantasy. N!xau, who played the role of XiXo, a San from the Kalahari desert was only paid a few hundred dollars for his role in the first film.

N!xau let his first wages blow away in the wind but by the time the second series was made, he was wiser to the ways of our world. He demanded several hundred thousand dollars for the second film.

He became a farmer when his filming career ended and died in 2003, age uncertain.

So, while I enjoy watching XiXo and his clan, its also sad to see the loss of innocence, not only in the film but also in real life.

I started painting many years ago (in the 1980's) while I was studying anthropology. So it seems fitting that my thoughts have returned to a time, long ago, when I used painting to think about and debate anthropological theories. My canvas was a wonderful tool to keep my mind at peace and open worlds and cultures.

Yesterday, I was only able to start painting later in the day and stopped at 3 am this morning.

And strangely, it was thoughts of N!xau and the magnificent Kalahari desert that found its way into a painting of Kilkee! 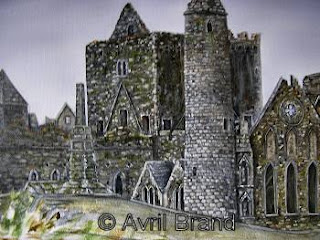 This is one of the most challenging paintings! And I love it... one wall or the tower can take two days to paint. And I am only on the first layer!

Landscapes do not usually take long to paint but I have been busy with this painting for several weeks now. Well, in between others like Kylemore Abbey (finished that one, at last) and Doonagore Castle (halfway done) and otters, elephants and a new one of Kilkee Beach, still only its draft stage.

Its hopeless trying to paint today. I promised myself this morning that I would only spend an hour online as I am keen to continue with my painting of the Rock of Cashel.

And all the other paintings I am busy with on a 'rotation' basis - elephants, otters, castles...

My hour has become many hours as I find more and more blogs, familiar names, beautiful art and come across so many artists that I have been admiring for such a long time. So, I started added links... and just find more and more information.

And I thought my website was sufficient. I am way behind the times... ROFL.
Posted by Avril Brand at 25.5.08 No comments:

Welcome to my artist blog.
Please stay a while or take a look at my website art gallery at www.clareartist.com

As this is my first blog, please be patient as I stumble around and find my feet. I really should be working on my paintings but I am fascinated by all this 'blogging' that I hear so much about.

So, while I will try to keep updating this blog, I may be away for several days as I forget about the world out there and disappear into my canvas.