The program of 2010 art courses are posted on my website as well as news about student exhibitions, the working studio and art suppliers. So, if you have the time, pop in to take a look.
There are also special one week painting holiday courses next year - only two for the year - so if you are interested, please book early as the courses fill up very quickly.
I am very happy about the easels and daylight simulation lamps!! Now we can paint away the dark, rainy winter days.
These lamps are absolutely wonderful to work with and each student has his/her own lamp. The painting you see to above is one that I am still working on and hopefully will be finished this year.
With one more six week course to go and a short Christmas Gifts course left this year, I decided to post the 2010 program early as this years courses are almost full.  I had to postpone the six week course to start on the 6th, 7th and 8th of October due to surgery I have to undergo next week. I have just been so busy with very little time to post on my blog and I apologise for the neglect .
But, I am looking forward so much to the next course starting with lots of new exciting ideas for my students to work on!
The last course was portrait painting and they were brilliant! I am so proud of my students!!!
Their 2009 works will all be displayed during our February "Art is for Everyone" exhibition. Hope you can be there! 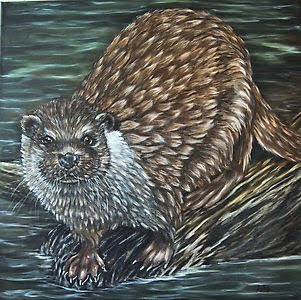 I worked on this painting, on and off, for almost two years and now I think I am satisfied that it is finished.

This cute little creature is an European Otter and the painting depicts the moment before he slips into the water again. I love the cheeky look on his adorable little face.

ISPCA Otter Sanctuary was opened in May 2007 in County Longford, Ireland due to the declining numbers of otters in Ireland. May their good work be successful!

The European Otter’s diet mainly consists of fish but can also include birds, insects, frogs, crustaceans and sometimes small mammals, including young beavers.

In general this opportunism means they may inhabit any unpolluted body of freshwater, including lakes, streams, rivers, and ponds, as long as there is good supply of food.

European Otters are strongly territorial, living alone for the most part. The territories are only held against members of the same sex, and so those of males and females may overlap.

Males and females will breed at any time of the year, and mating takes place in water. After a gestation period of about 63 days, one to four pups are born, which remain dependent on the mother for a year.

The male plays no direct role in parental care, although the territory of a female with her cubs is usually entirely within that of the male. Hunting mainly takes place at night, while the day is usually spent in the European Otter’s holt (den) – usually a burrow or hollow tree on the riverbank which can sometimes only be entered from under water.

The European Otter declined across its range in the second half of the 20th century primarily due to pollution from pesticides such as organochlorine pesticides and polychlorinated biphenyls .

Other threats included habitat loss and hunting, both legal and illegal European Otter populations are now recovering in many parts of Europe for example in Britain the number of sites with an otter presence increased by 55% between 1994 and 2002.

Recovery is partly due to a ban on the most harmful pesticides that has been in place across Europe since 1979, partly to improvements in water quality leading to increases in prey populations, and partly to direct legal protection under the European Union Habitats Directive and national legislation in several European countries.

In Hong Kong, it is a protected species under Wild Animals Protection Ordinance Cap 170. They are listed as Near Threatened by the 2001 IUCN Red List. (Wikipedia)