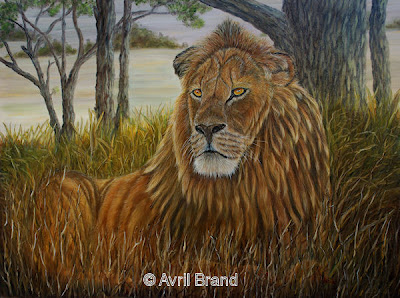 Oils on canvas (30×40 inches) (sold)
This painting took a long time to complete, mostly because of the large size of the painting. During my visit to South Africa in March 2009, I took photo’s of this majestic male lion who was watching his lionesses stalk our vehicle.
Visually, the male lion is highly distinctive and is easily recognized by its mane. The lion, particularly the face of the male, is one of the most widely recognized animal symbols in human culture.
Lions spend much of their time resting and are inactive for about 20 hours per day.
The lion (Panthera leo) is one of the four big cats in the genus Panthera, and a member of the family Felidae. With some males exceeding 250 kg (550 lb) in weight, it is the second-largest living cat after the tiger.
The mane of the adult male lion, unique among cats, is one of the most distinctive characteristics of the species. It makes the lion appear larger, providing an excellent intimidation display; this aids the lion during confrontations with other lions and with the species’ chief competitor in Africa, the spotted hyena.
The rule of thumb is the darker and fuller the mane, the healthier the lion. Sexual selection of mates by lionesses favors males with the densest, darkest mane.
The lion is a vulnerable species, having seen a possibly irreversible population decline of thirty to fifty percent over the past two decades in its African range. Lion populations are untenable outside of designated reserves and national parks.
Habitat loss and conflicts with humans are currently the greatest causes of concern. (wiki)
Posted by Avril Brand at 29.4.10 No comments: 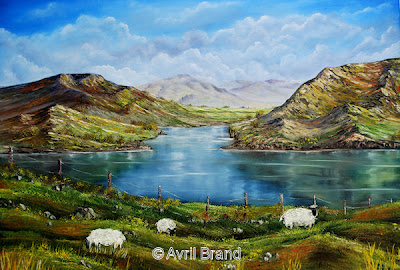 I decided to do most of the work in this painting with the palette knife using crisp, bright colours. Ireland is spring time is a real delight for the eyes and a visit to Connemara is heavenly.

Connemara (in Irish: Conamara), which derives from Conmhaicne Mara (meaning: descendants of Con Mhac, of the sea), is a district in the west of Ireland consisting of a broad peninsula between Killary Harbour and Kilkieran Bay in the west of County Galway or south west Connacht.

The Ó Cadhla (Kealy) clan were the rulers of Connemara up until the 13th century, when they were displaced by the O Flahertys. The latter had fled into Iar Connacht from Maigh Seola during the English invasion of Connacht in the early 1200s. Like the Ó Cadhla clan, the Mac Conghaile (Conneely) clan was also a branch of the Conmhaicne Mara.

The coast of Connemara consists of a number of peninsulas. The peninsula of Iorras Ainbhtheach (sometimes corrupted to Iorras Aithneach) in the south is the largest and contains the villages of Carna and Kilkieran. The peninsula of Errismore consists of the area west of the village of Ballyconneely. Errisbeg peninsula lies to the south of the village of Roundstone. The Errislannan peninsula lies just south of the town of Clifden. The peninsulas of Aughris, Cleggan and Renvyle are found in the north-west of Connemara. Of the numerous islands off the coast of Connemara, Inishbofin is the largest; other islands include Omey, Inishark, High Island, Friars Island, Feenish and Mweenish.

The main town of Connemara is Clifden. The area around the town is rich with megalithic tombs 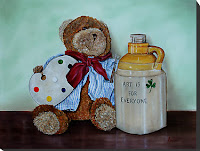 I love teddy bears. They remind me of my childhood.

I really enjoyed doing this painting. The little teddy bear was a gift from my art students and I bought the little jug from a quaint shop in Doolin. The jug had other wording so I changed it to ‘Art if for Everyone’... the name of my art courses.

I love this little teddy – it is so cute with a tiny palette, apron and little brushes in it’s pocket.

Invictus was a dream

I really enjoyed the movie, Invictus - reminded me of those heady times when we believed there could be peace. I will lose myself in painting today because I need to escape from reality.

Bad memories and a deep sadness for ALL the victims and their suffering families throughout the years has come back to haunt me.

This is not about one man who lived in the past and had futile and sad illusions, but about ALL the people the world disregards and some even say: You deserve it. No one deserves this.

I think of the slogan on a TV channel... "we are African - not because we are born in Africa but because Africa is born in us". No matter where we are in the world, we know this will always be with us. We also know that we cannot expect anyone to understand.

But, if you have the stomach for it, take a look and remember. Today, I also remember a friend, Pieter Pieterse, a kind and talented man who was brutally taken away from us. Other friends, neighbours and way too close to home. After more than 7 years in Ireland, my memories have started to fade. Thank God.
http://afrikaner-genocide-achives.blogspot.com/ 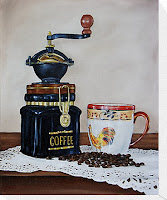 I found this quaint old coffee grinder in a shop in Miltown Malbay, County Clare and could not resist doing a still life painting. Cute cups, tea sets and all kinds of lovely items can be found in the shop.

And, of course, being a coffee lover, the subject matter kept me refilling the cup. Not good when you are painting as too much caffeine gives you a shaky hand!!