"Eye of the Leopard" - Oil Painting 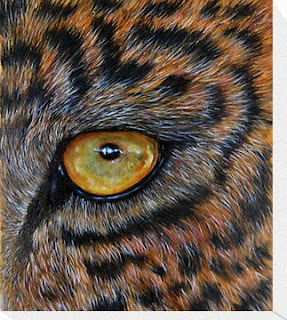 The leopard (Panthera pardus) has relatively short legs and a long body with a large skull. It is similar in appearance to the jaguar, although it is of smaller and slighter build.

The species’ success in the wild owes in part to its opportunistic hunting behavior, its adaptability to habitats, its ability to run at speeds approaching 58 kilometres per hour (36 mph), its unequaled ability to climb trees even when carrying a heavy carcass, and its notorious ability for stealth.

Leopards may sometimes be confused with two other large spotted cats, the cheetah and the jaguar. However, the patterns of spots in each are different: the cheetah has simple spots, evenly spread; the jaguar has small spots inside the polygonal rosettes; while the leopard normally has rounder, smaller rosettes than those of the jaguar.

The leopard is larger and much more muscular than the cheetah, but slightly smaller and more lightly built than the jaguar. The leopard’s rosettes are circular in East Africa but tend to be squarer in southern Africa.

The leopard is known for its ability in climbing, and it has been observed resting on tree branches during the day, dragging its kills up trees and hanging them there, and descending from trees headfirst. (wiki)

Art is for Everyone exhibition

On Thursday, 18th February, we had our second "Art is for Everyone" exhibition at the Kilrush Library, County Clare, Ireland.

There were 83 oil paintings by 25 artists of County Clare and they were all incredibly beautiful. The paintings were done on courses during 2009 and some of them were the first paintings ever done by my wonderful students!!!

My thanks to all my friends and to everyone who braved a chilly evening. We had approximately 100 to 110 guests at the opening night! Our sponsors provided delicious wines, cheeses and other refreshments and we really appreciate their support. (They do not want to be mentioned by name but at the end of the video, credit is given to everyone who is too shy to be mentioned!

So, I hope you enjoy my first attempt to use Youtube!!

Oils on canvas 50x70cm.
A beautiful beach and a beautiful day in Ireland! Fanore (Fán Óir, "the golden slope", in Irish) is a small village in County Clare on the west coast of Ireland.
Lying on the road between Ballyvaughan and Doolin, Fanore is renowned for its extensive sandy beach.
The village is very popular with walkers, surfers, tourists and is particularly interesting to botanists, owing to its location on the edge of the Burren – renowned for its unique flora and fauna.
It has a pub, a post office/shop, and a restaurant, as well as a surfing school near the beach. Fanore has appeared many times on Irish television: in particular, the Father Ted series often featured scenes filmed in Fanore and its surrounding villages. (wiki)
Posted by Avril Brand at 11.2.10 2 comments:

"Art if for Everyone" - exhibition

"Art is for Everyone"
Exhibition of Oil Paintings by County Clare Artists
18th February to 12th March 2010
Kilrush Library
Opening night: 18th February at 8pm
All Welcome!
This is will the second exhibition of oil paintings by my students and I am so proud of each and every one! There will be approximately 82 paintings done on course during 2009. This year we will also have beautiful portraits which were produced during a special portrait course in August last year. The very FIRST portraits in oils attempted by my students and really brilliant.
There will also be a variety of landscapes and seascapes as well as beautiful still life paintings.
If you are visiting county Clare, Kilrush, please go the the library to take a look! You will be amazed!
There are also wonderful prizes to be won by raffle - the proceeds will go to the Kilrush Lifeboat Station. The drawing of the raffle prizes will take place on the opening night.
This year I will be teaching a variety of different techniques and we will also be doing courses on 'animal landscapes' so next year's exhibition will have lots of paintings depicting animals as well as the usual still life and landscapes.
Posted by Avril Brand at 3.2.10 No comments: