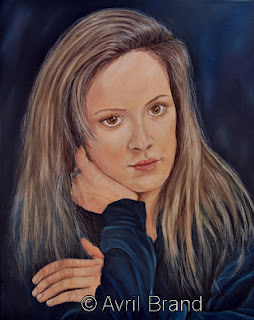 Portrait of Laura, a beautiful young lady and I feel very honoured to have painted her.

Thank you to Dalia of http://digitalcreationsmyway.com/

If you would like to commission me to paint that special person or pet in your life, just send me an email for information.
Posted by Avril Brand at 2.4.09 4 comments: 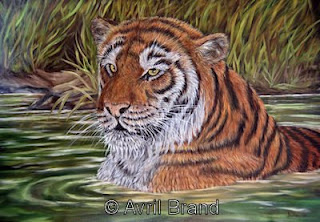 I have been working on this painting for several months. At last, it is finished. After visiting SA and seeing these beautiful animals at Jukani, I am inspired to paint them.

The tiger (Panthera tigris) is a member of the Felidae family; the largest of the four “big cats” in the genus Panthera. Native to much of eastern and southern Asia, the tiger is an apex predator and an obligate carnivore. Reaching up to 4 metres (13 ft) in total length and weighing up to 300 kilograms (660 pounds), the larger tiger subspecies are comparable in size to the biggest extinct felids. Aside from their great bulk and power, their most recognizable feature is the pattern of dark vertical stripes that overlays near-white to reddish-orange fur, with lighter underparts. The largest subspecies of tiger is the Siberian tiger.

They are territorial and generally solitary animals, often requiring large contiguous areas of habitat that support their prey demands. This, coupled with the fact that they are endemic to some of the more densely populated places on earth, has caused significant conflicts with humans. Of the eight subspecies of modern tiger, two are extinct and the remaining six are classified as endangered, some critically so. The primary direct causes are habitat destruction and fragmentation, and hunting. 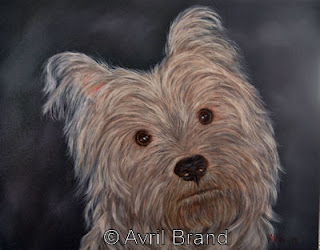 A portrait in oils of my darling doggy, Boetie.

He is a rescued dog (5 years old now!) and we got him when he was 8 months old. His first months were spent in an atrocious puppy farm and it took him a long while to trust us.

Now, he is a real character and, although he still has 'issues', he is the boss of us.

Love him to bits and when he looks at me like that with his big brown eyes, I will give him the world!
Posted by Avril Brand at 2.4.09 No comments: