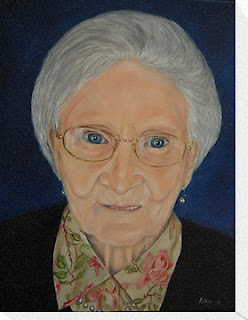 Portrait in oils of Katherine, a dear and sweet Irish Lady.

... A face full of joy and pain and the many memories of a lifetime.

For more information about commissions, just contact me through my website Clare Artist or from my Gallery 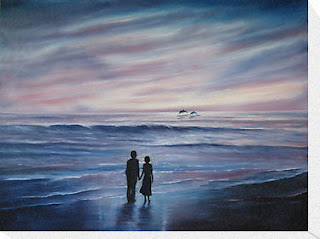 A very special painting for my dear friend, Bridget, remembering a time when she and her dearly departed husband watched the dolphins at Spanish Point.

May your memories of that day always be with you, dear Bridget and comfort you when you feel alone. 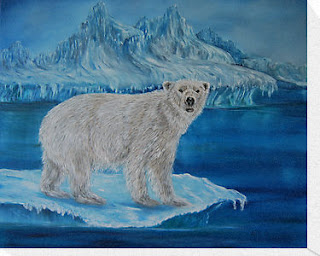 I have been working on this painting for several months and now, I think, it is finished… The temptation to add more and more is an artist’s greatest dilemma… knowing when to stop!

The polar bear (Ursus maritimus) is a bear native largely within the Arctic circle encompassing the Arctic Ocean, its surrounding seas and surrounding land masses. It is the world’s largest carnivore species found on land. It is also the largest bear, together with the omnivore Kodiak bear which is approximately the same size. An adult male weighs around 350–680 kg (770–1,500 lb),[ while an adult female is about half that size.

Although it is closely related to the brown bear, it has evolved to occupy a narrow ecological niche, with many body characteristics adapted for cold temperatures, for moving across snow, ice, and open water, and for hunting the seals which make up most of its diet.

Although most polar bears are born on land, it spends most of its time at sea, hence its name meaning “maritime bear”, and can hunt consistently only from sea ice, spending much of the year on the frozen sea.
The polar bear is classified as a vulnerable species, with 5 of the 19 polar bear sub populations in decline.

For decades, unrestricted hunting raised international concern for the future of the species; populations have rebounded after controls and quotas began to take effect. For thousands of years, the polar bear has been a key figure in the material, spiritual, and cultural life of Arctic indigenous peoples, and the hunting of polar bears remains important in their cultures.
Information source: Wikipedia