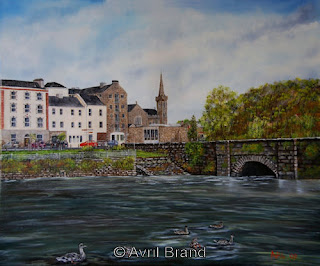 This painting took several months to complete as I tried to paint it as accurately as possible, using a magnifying glass for certain areas.

Kilrush is a lovely town, a few miles from where I live – friendly people, home of Mrs Crotty’s (pub well known for Irish traditional music) and the Vandeleur Gardens. (Vandeleur was the infamous landlord who evicted Irish tenants… see history below)

This view is of the bridge with the beautiful, historic church in the background and a few of the buildings kno

Left: part of the painting - little miniature cars in front of Merchant's Quay.

CILL ROIS, meaning the church of the promontory or woods has existed since the 16th century but it was not until the 18th century that it underwent major development. This development coincided with the succession of John Ormsby Vandeleur as the wealthiest landlord in the district. Of Dutch origin, the Vandeleur Family was the most prominent landlord family in West Clare. They designed the layout of the town and many of the present day street names derive from Vandeleur family names.

John Ormsby Vandeleur built the large family home, Kilrush House in 1808 and by that stage he practically owned Kilrush. With wealth achieved from a financially beneficial marriage and some political skulduggery, he decided to develop the town. A Scots businessman James Patterson, who had been a gunboat lieutenant until 1802, assisted him in this project. Patterson entered the oats trade in West Clare and in 1802 he got a site on the square from Vandeleur and erected a six-storey building.

However the famine years (1845-1849) brought much hardship to Kilrush. Famine, evictions, fever and cholera reduced the population of south-west Clare to such an extent that it never attained its pre famine numbers. In the post famine era, the Vandeleur name became synonymous with the worst of landlord evictions, with over 20,000 evicted in the Kilrush Union. The Kilrush workhouse witnessed terrible deprivation and deaths. By that stage Hector Vandeleur had succeeded John Ormsby Vandeleur.

Kilrush however survived these setbacks and with the arrival of the West Clare railway towards the end of the 19th century, developed into a bustling market town, the spirit of which lasts today. The designation of Kilrush as a Heritage Town recognises its legacy as a landlord estate town with a rich maritime and market tradition.
http://www.kilrush.ie/Ourtown/history.html

A few photographs of beautiful County Clare, Ireland, taken with my Ni 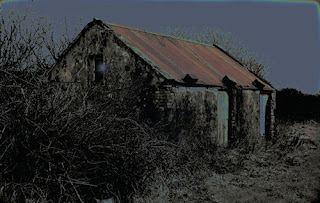 kon D60...
I am still learning how to use this lovely camera. I hope you enjoy the photo's!! 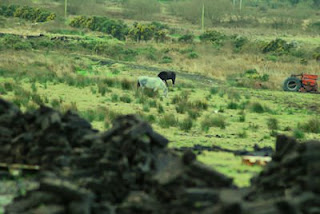 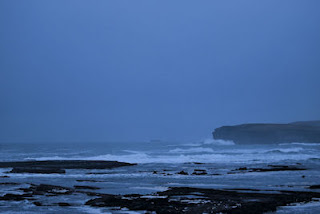 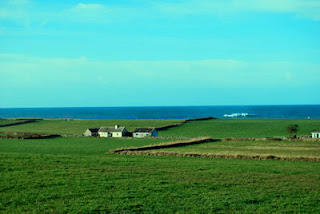 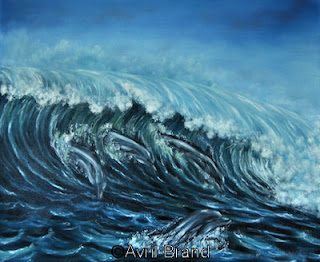 Dolphins are wonderful animals to watch as they play in the waves. I blurred them slightly to give the impression of speed as they break through the water.

This is a sight familiar to the wonderful people of the RNLI Kilrush as they go out in all weathers, risking their own lives to rescue people in trouble on the sea.

The proceeds from this painting will be donated to the RNLI Kilrush in appreciation for the wonderful work they do, saving lives and always ready and on call! The painting will be sold by raffle leading up to an art exhibition which takes place on the 12th February 2009 at the Kilrush Library.

I thought the subject would be appropriate as dolphins have a reputation for saving humans as well. Unfortunately, there are countries and people who do not show the same respect for these magnificent animals. Let us hope that a day will come when both humans and animals who play such important roles in our lives will receive the honours and respect they all deserve. 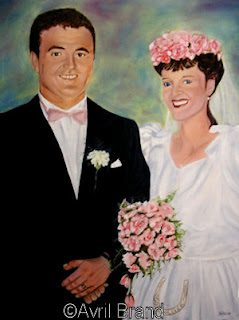 Portrait commissioned by Maura as a surprise Christmas gift for her son and daughter-in-law. And, Maura says, they were indeed very pleasantly surprised as a portrait of their wedding of years ago was the last thing they would have thought of.

I am very pleased and honoured that Maura chose me to paint this portrait!!