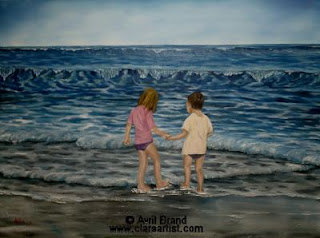 Little children playing on the beach. The little girl holds the little boy’s hand as they dip their feet into the foam!! A picture of innocence and friendship!

When I saw the black and white photo, I absolutely loved it.

So, thank you to Patrizio Martorana on SXU for allowing me to use his photograph as reference for this painting! 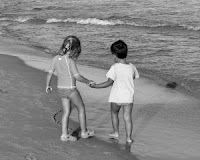 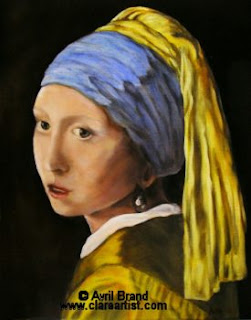 I love the Old Masters and this is my take on the Girl with the Pearl Earring by Vermeer.

It started well but I got bored copying the painting, threw away the picture and ended up doing my own thing.

So, although the painting is similar, I changed some of the features on her face and some folds on the clothes…

Hope you like my Pearl Earring with Girl Attached!!! :-)

A dear friend made this posting that once again draws our attention to just how depraved some of us can be.

For those of us who love animals, who regard our pets as part of the family and even for those who don't have pets... please take note:

I was contacted last night by my sister, who was in tears after seeing this [she never ever cries].

There is so much animal cruelty in the word, and most of us aware of it’s existence, but do we all know the extent of it, and how bad it can be out there for animals.

Please visit this site [link at the bottom] and click on the how to help link to sign a petition to help stop this barbaric trade.

The video link on this page is definately not for sensitive people to watch – it will crumble the strongest of people, so DO NOT watch it if it is likely to upset you. It reduced my sister to a snivelling mess, and she is the strongest person I know, who often runs across animal cruelty, being an active campaigner against it.

"If you could read my mind" - Oil painting 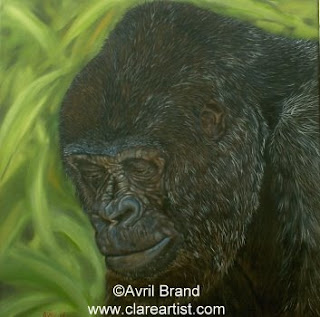 When I first saw this gorilla, I was immediately struck by what I perceived to be sadness. He looks so deep in thought and I wondered what this beautiful creature was thinking… of family lost, freedom lost and what we humans do in our endless arrogance and greed to other animals on this planet.

I hope that one day, we will realise that they are just as worthy of life and freedom as we would like to believe ourselves to be.

I love painting eyes. However, what I like about this painting is not being able to see the gorilla’s eyes. His posture tells the story.

Gorillas, the largest of the living primates, are ground-dwelling herbivores that inhabit the forests of Africa. The DNA of gorillas is 98%–99% identical to that of a human, and they are the next closest living relatives to humans after the two chimpanzee species.

Gorilla’s are highly endangered, and have been subject to intense poaching for a long time. Threats to gorilla survival include habitat destruction and the bushmeat trade. In 2004 a population of several hundred gorillas in the Odzala National Park, Republic of Congo was essentially wiped out by the Ebola virus.

A 2006 study published in Science concluded that more than 5,000 gorillas may have died in recent outbreaks of the Ebola virus in central Africa. The researchers indicated that in conjunction with commercial hunting of these apes creates “a recipe for rapid ecological extinction”. (Wikipedia)

My thanks to Rocketchook for his kind permission to use his photograph as reference for this painting!!!

Busy Bee - a painting in gouache 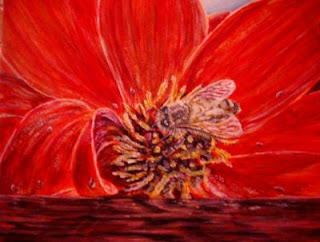 A fun little painting of a bee collecting nectar on a rainy day!

This little bee will hopefully not end up in the water!

My thanks to Andres Ojeda for permission to use his photograph as a reference for this painting.